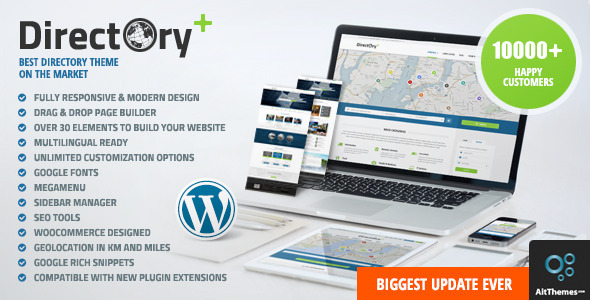 First version of our Directory theme was released in January 2013 as an absolutely unique theme concept, first time ever on themeforest. You’re able to easily set up an online directory portal listing categorized items of any type – companies, shops, websites and so on. We’ve spent quite a long time developing the theme as many things were changed several times to make it right.

Theme was continuously updated with new features, it was getting better and better. Over the two years Directory WordPress theme received almost 100 free updates, which is remarkable.

In the beginning of 2015 we started working on new theme update called Directory+. We made a list of our customer requirements and new theme was born. This brand new Directory+ WordPress theme is coming to all our existing Directory customers free of charge.

You’re able to set up 7 different headers per any page:

Each Directory listing detail page can have in the header one of the following:

We’ve simplified your life and prepared you also over 14k category icons and map pins to help you start your profitable online business faster.

There is no issue using Google Maps on directory sites unless number of map loads is not higher than 25000 a day. If number of calls to Google is higher, you need to purchase Google maps for Business license. Please check the following url for more details.

Note: Images used on our demo sites are proprietary images and are not included in the theme package.